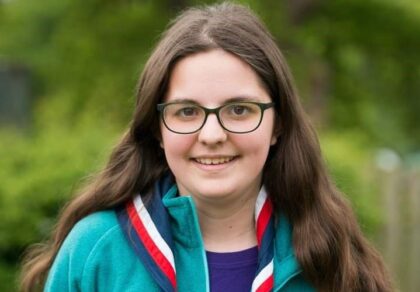 Emilia shares her views and experiences of being a trustee as part of our series of Trustees Stories.

I’ve been a trustee for the Student Christian Movement (SCM) since August 2018. We’re a membership-based charity who support and work with progressive Christian students in Higher Education across Britain (with our staff office in Birmingham) and have a particular focus on being inclusive and celebrating diversity, as well as putting our faith in action (often through social justice projects). We’re also unique in that the charity is entirely student led – all the trustees and members of SCM’s General Council are students or recent graduates. I am also an ambassador for the Young Trustees Movement, an organisation that is working to increase the number of young trustees (under 35) on boards in England and Wales. Outside of being a trustee I have recently graduated from a degree in motorsport engineering, and work as a graduate engineer in the automotive industry.

I wasn’t planning to be a trustee, it happened almost by accident! I had been a member of SCM for around 6 months when I attended their annual national gathering and AGM for the first time in March 2018. I was struck by how inclusive it was and how welcome I was made to feel. Over the weekend I got to learn a little about being on SCM’s General Council/trustee board and chatted with one of the trustees at the time, and despite knowing little about SCM at the time she put it in my mind to consider being on General Council/board of trustees as a way to get involved with the national movement. I went along to a trustee meeting in the April to see what it was like, before being asked to be co-opted onto the board of trustees, starting in August 2018. I was initially on the board for two years, and in March 2020 was elected for a second term, that ends next summer.

Being a trustee is something I really enjoy. I prefer organising and running things instead of just taking part and being a trustee for SCM allows me to do that, as well as meeting our wonderful members and friends. The decisions we make as trustees work towards protecting the charity so it’s there for others in the future; something that’s really important to me, and rewarding. Becoming a trustee age 19, I was worried I didn’t know enough about charity governance or if I had the confidence to make decisions. However with good training and support from other trustees and staff, I learnt what questions to ask so I always feel informed when making decisions. I realised that most of the knowledge and skills comes with time, and a passion for the organisation was all you need to get started as a trustee. Now, a few years later, I like supporting new trustees to feel confident in decision-making and governance knowledge, as well encouraging more young people to become trustees (through my work with the Young Trustees Movement).